The daughter of music legend Paul, Stella opted for a different route to the top. At the age of 13 she had already begun to design jackets. In 1997, she went onto become a creative designer at Chloe, following in the footsteps of fashion icon Karl Lagerfeld. McCartney realised her talents, setting up her own label 4 years later. Stella has gone to optimise British fashion in the 21st Century; designing for celebrities from Madonna to the Team GB Olympic squad for 2012 and 2016. An advocate of animal rights like her mother Linda, McCartney ensures her products are crafted with sustainable materials omitting the use of animal testing and supplies. Her collection will have you feeling golden, as will her assortment of deluxe glasses. Stella McCartneyâ€™s collection of Prescription Glasses is made with detailed shapes such as Half Framed and Retro Squared, using a dashing palette of colours and design to create a pair of womenâ€™s spectacles that portray confidence, vibrancy and sophistication. Glasses are made with resistant material like acetate and metals to create a spectacle which lasts. Browse her extensive collection here at Glasses Station, such as the Stella McCartney Glasses SC0045O, complete with a black Retro Squared frame and decorated with a golden streak at the top of the frame. 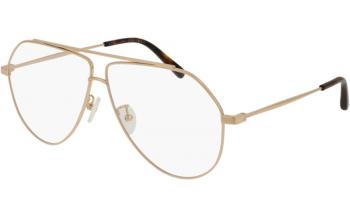